Trump says crime in Germany ‘way up’ because of immigration. It’s not. 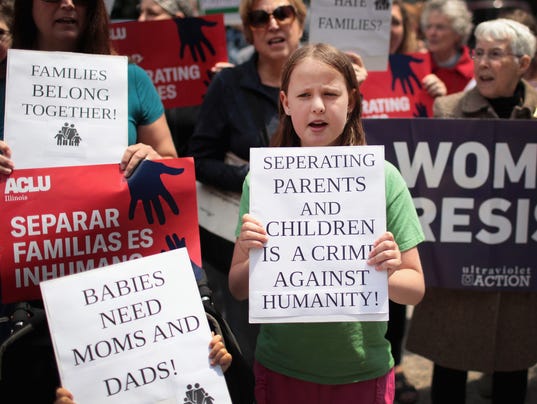 Demonstrators protest the Trump administration policy that enables federal agents to separate undocumented migrant children from their parents at the border on June 5, 2018 in Chicago.(Photo: Scott Olson, Getty Images)

“The people of Germany are turning against their leadership as migration is rocking the already tenuous Berlin coalition,” Trump tweeted Monday. “Crime in Germany is way up.”

Last month, the German Interior Ministry actually announced that the total number of crimes committed in the country in 2017 had fallen 5.1 percent from the previous year. The number of crimes deemed politically motivated fell 4.9 percent.

Trump blasted the “big mistake” made acrossÂ Europe by accepting millions of immigrants “who have so strongly and violently changed their culture!”

“We donât want what is happening with immigration in Europe to happen with us!” Trump said.

More: Separation of immigrant families draws lawmakers to the border

Republicans in Congress were tentatively planning to offer two bills this week, one that would sharply curtail legal immigration and a compromise measure, as yet not revealed, that could draw criticism from conservatives. President Trump on Monday tweeted a challenge to Democrats, saying they should back GOP immigration bills aimed at fixing “the world’s worst immigration laws.

“Where is the outcry for the killings and crime being caused by gangs and thugs, including MS-13, coming into our country illegally?” he added.

At a space event later, Trump discussed immigration and again blamed Democrats for failing to sign on to Republican immigration proposals.

“The United States will not be a migrant camp or a refugee holding camp,” he said.

He saidÂ the child separations are a function of current law, adding that “we’re stuck with these horrible laws … We have the worst immigration laws in theÂ  entire world.”Â

We donât want what is happening with immigration in Europe to happen with us!