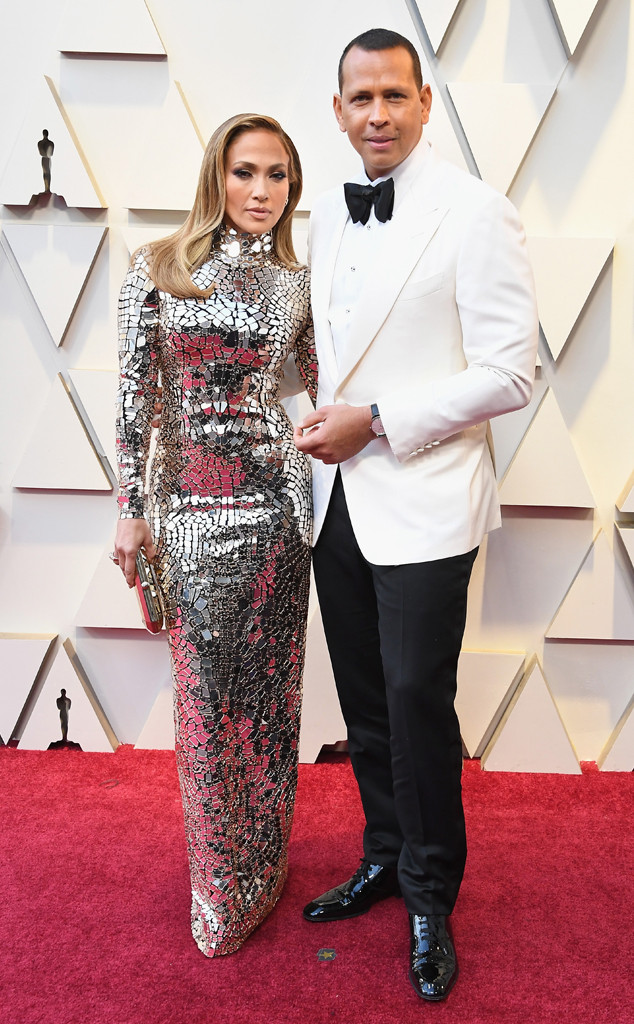 Jennifer Lopez and Alex Rodriguez have been one of the most glamorous couples to hit the red carpets and the streets since they started dating two years ago.

On Saturday, the lovebirds surprised their combined 90 million-plus Instagram followers by announcing to the world that they are engaged. Both J.Lo and A-Rod posted the same photo of the artist showing off her diamond sparkler with the white sand right below. It looks like Rodriguez popped the question at sunset with a bonfire close by.

The two of them are enjoying some “down time” together in Bakers Bay. Some of their activities (other than an engagement, of course) included boating, heading to the beach and relaxing by their infinity pool which overlooked the ocean.

A-Rod shared photos on his Instagram Story of their weekend getaway. He also posted a cryptic message about soulmates that, in hindsight, offered up a big hint as to what would happen on Saturday.

The 43-year-old popped the question with an emerald cut diamond ring. Experts estimate that it costs about $1 million retail. Jewelry and style expert Lauren McCawley shared with E! News, “J. Lo’s new emerald cut stunner is what engagement ring dreams are made of. An approximate 15-carat diamond sparkles in a platinum solitaire setting and could easily retail for $1 Million.”

Andrew Brown, President of WP Diamonds, also believes Rodriguez shelled out about $1 million for it.

Another expert estimated it could be worth a bit more than $1 million. Ira Weissman, founder of The Diamond Pro, tells E! News, “This approximately 20 carat emerald cut diamond is exquisitely cut and of superb quality. When you have an extremely rare and timelessly breathtaking stone such as this one, the goal of the ring should be to show off the rock naturally with as little embellishment as possible—the perfect compliment to the ageless enduring beauty of J.Lo. The ring is worth approximately $5 million dollars.”

Their two families are already blended perfectly into one and it’s clear that their mutual admiration for each other won’t diminish anytime soon.

Take a look at the photos below to see some of J.Lo and A-Rod’s cutest couple moments together.

A Love out of this world

J.Lo and A-Rod look lovingly into each other’s eyes at the 2019 Vanity Fair Oscars After-Party. She wore a gorgeous Zuhair Murad strapless gown to the event.

The former New York Yankee makes his 2019 Oscars debut alongside his love, who shimmered in a Tom Ford mosaic dress.

Hat’s Off to You

The lovebirds smile and pose on the red carpet at the 2019 Grammys.

All in the family

A-Rod, J.Lo and their kids smile as the celebrate the end of her Las Vegas residency.

The couple match in red outfits while out together in Beverly Hills.

The “Dinero” singer and her beau keep it cool in white while vacationing in Italy.

J.Lo and A-Rod strike a pose on the red carpet before heading into the 2018 Met Gala.

The couple strikes a pose at the Guess Spring 2018 Campaign Reveal in January 2018.

The athlete spent the day by the pool with J.Lo’s two children during their summer break

Little did the “Ain’t Your Mama” songstress know she would end up dating this then-Yankees player (she was married to Marc Anthony at the time).

Shortly after their relationship was confirmed, Lopez and Rodriguez jetted off to an exclusive resort in the Bahamas.

The now-official couple snuck into the Yankees’ training camp where A-Rod mentored and J.Lo watched from the stands.

After trips to the Bahamas and Miami, J.Lo and A-Rod made their way back to California.

The former MLB star shielded his lady from the rain with an oversized umbrella after lunch at Manhattan’s Marea.

The couple visited the hotspot restaurant multiple times during their stay in NYC.

The happy couple kept each other warming during a trip to New York City.

Lopez and Rodriguez turned up the heat when they were spotted with Rodriguez’s mother, Guadalupe.

The pop star accompanied her boyfriend to a meeting, and both looked pretty good.

Lopez and Rodriguez held hands as they made their way through Rockefeller Center in April 2017.

From the Moment They First Met (Gala)

The couple were ready to dance the night away, attending the 2017 Met Gala after-party at the Standard Hotel’s Boom Boom Room.

Out and about in New York, the retired MLB player and pop star had a dinner date at Carbone.

Congratulations again on the big engagement!