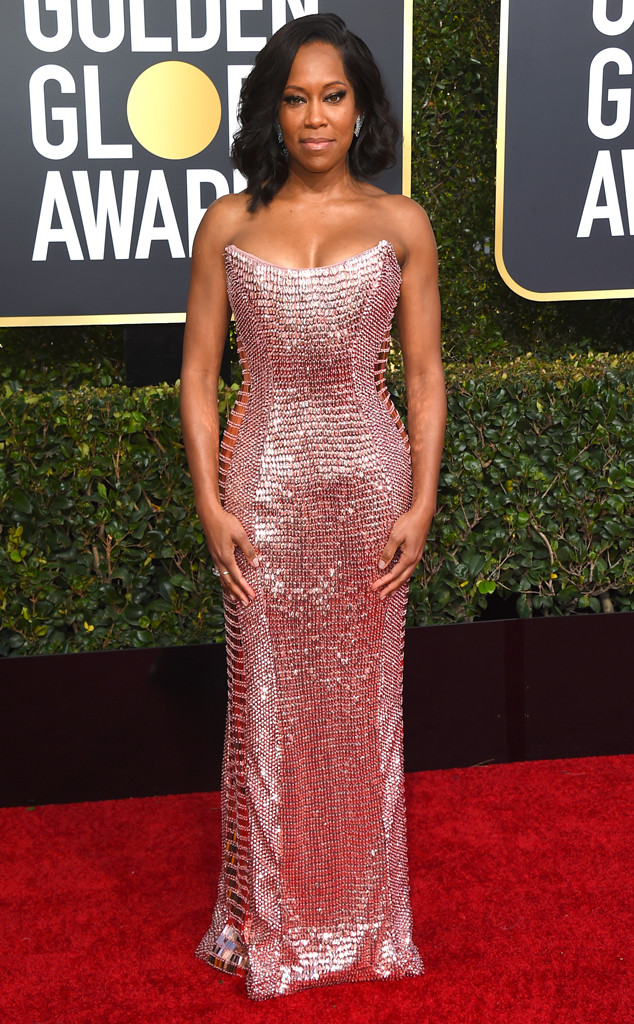 The actress has been nominated for Best Performance by an Actress in a Supporting Role at the 2019 Oscars for her incredible work in If Beale Street Could Talk. As award season comes to an end this weekend, we’re looking back at King’s stunning style evolution.

It was just last month that King dazzled on the red carpet at the 2019 Golden Globes, where she wore a gorgeous Alberta Ferretti pink sequin dress. Just weeks ago, King turned heads in another pink gown, this time designed by Atelier Versace.

And that’s only the recent ensembles that King has rocked on the red carpet!

In celebration of King, let’s take a look back at her best looks! And be sure to watch as she hits the red carpet this weekend at the Academy Awards!

Regina King was a showstopper at the 2019 BAFTAs.

The Oscar nominee stopped for photographers at the Charles Finch & Chanel pre-BAFTAs dinner.

The Seven Seconds performer was a vision in purple at the 2019 Critics’ Choice Awards.

At the New York Film Critics Circle Awards, the This Is Us director turned heads in a pink gown.

Jamie McCarthy/Getty Images for National Board of Review

All eyes were on the Finest producer at the The National Board of Review Annual Awards Gala in 2019.

The Enemy of the State actress rocked the red carpet in black and white Valentino gown at the 2019 Palm Springs International Film Festival.

The American Crime actress stopped for photographers in a beautiful Jenny Packham dress with crystal embellishments before making her way into the 2018 Governors Awards.

The Los Angeles native posed at a photo call for her movie, If Beale Street Could Talk, in New York City.

The Emmy winner stunned on the red carpet in Michael Kors collection gown at the 2018 New York Film Festival Premiere of If Beale Street Could Talk.

The University of Southern California alum made heads turn at the If Beale Street Could Talk premiere at 2018 Toronto International Film Festival.

King showed off her toned arms in a strapless yellow Christian Siriano dress at the 2018 Emmy Awards.

The Seven Seconds star sported a black cutout dress by Christian Siriano at the 2017 Elle Women in Hollywood Awards.

The BET Award winner shined in a metallic Galia Lahav dress at the 2017 Emmy Awards.

The Southland actress struck a pose in Romana Keveza strapless gown at the 2017 Golden Globes.

King proved she knows how to make an entrance when arriving to the 2016 Emmys in a red strapless Elizabeth Kennedy frock.

The NAACP Image Award winner paired an embellished top with a silver skirt for her appearance at the Essence Black Women in Hollywood Luncheon in 2015.

The Big Bang Theory guest star was all smiles when arriving to the 2016 Golden Globes.

So gorgeous! King was a true showstopper in a pearl adorned Krikor Jabotian dress at the 2015 Emmys.

At the 2014 NAACP Image Awards, the Ray actress had all eyes on her in an edgy black Michael Costello gown.

The Leftovers star arrived to the 2013 People’s Choice Awards in a lace adorned Badgley Mischka dress.

King brought her A-game in a Romona Keveza gown at the 2012 NAACP Image Awards.

US to open more beds for immigrant children as numbers rise

Sunrise near the Mt. Machhapuchche