Nicaragua refugees: ‘I don’t understand why people hate us’

One year ago, on 18 April 2018, Nicaraguans took to the streets to protest against proposed changes to the country’s social security system.

The protests soon widened into calls for the resignation of President Daniel Ortega, whose government responded with a deadly crackdown. More than 300 people were killed and thousands injured.

Tens of thousands of Nicaraguans have since fled to neighbouring Costa Rica, but as Lisa Louis reports from the capital, San José, not all received the welcome they had hoped for.

“We were asking for more social justice,” he recalls of those early days of protest. “But the government’s response was to arrest, torture or kill lots of us.”

8 July: The deadliest day of clashes in Nicaragua since protests started, with 38 people reported dead in three areas.

24 July: President Ortega refuses to bow to protesters’ demands to stand down, saying the hundreds of deaths during three months of protests were caused by paramilitary groups.

21 March 2019: The Nicaraguan government agrees to release all opposition prisoners within 90 days in a bid to restart stalled peace talks.

After two months of protests, during which the 21-year-old student from Managua saw fellow protesters disappear and get killed, Mr Obregón decided to flee to Costa Rica.

Now he is sharing a house in San José with 10 other Nicaraguans, part of the spiralling number who have sought refuge in the neighbouring country. 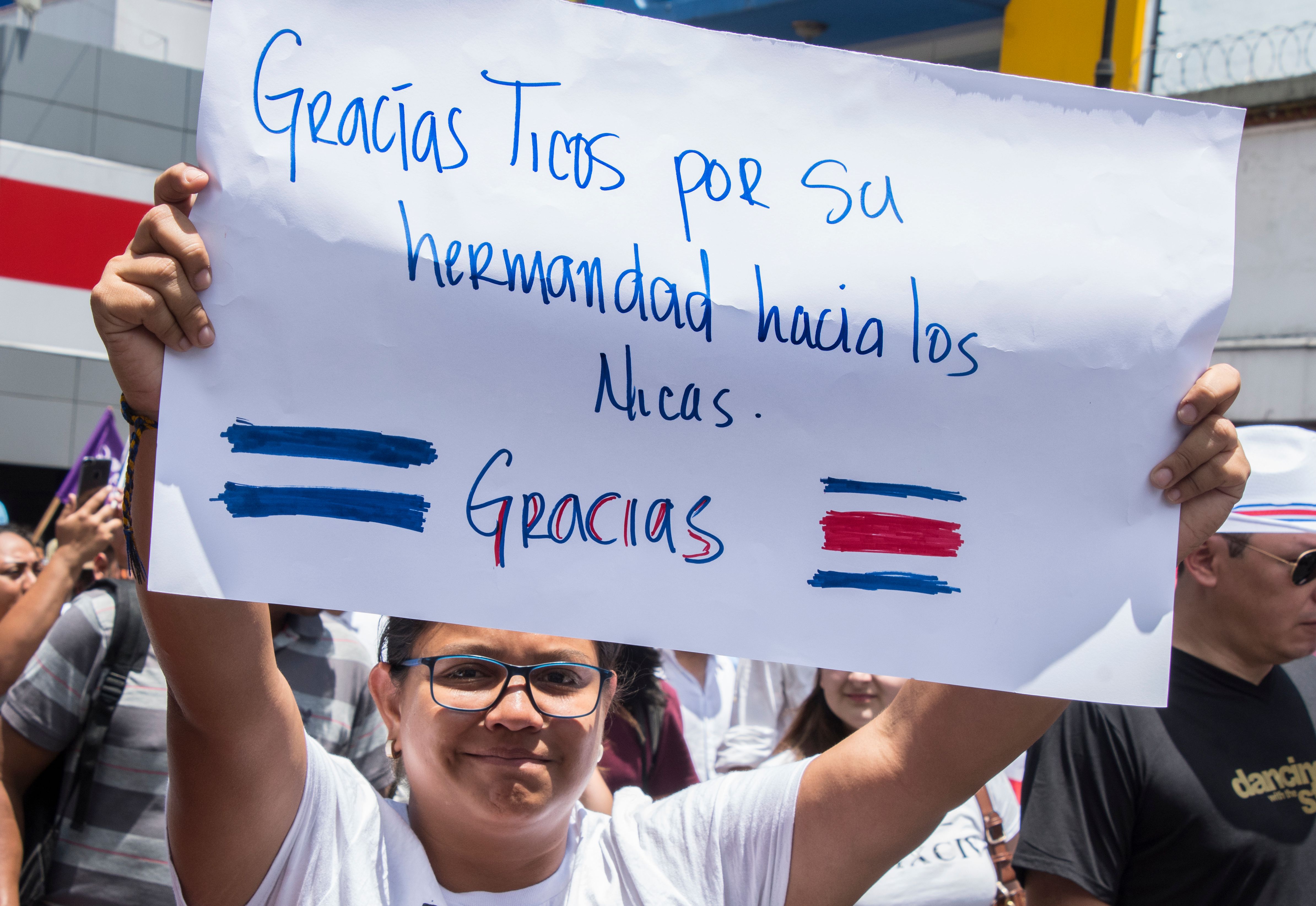 The huge increase in asylum seekers has not gone unnoticed among Costa Ricans and some have taken to the streets in protest.

Last August, about 500 marched into Parque de la Merced, a park in San José frequented by Nicaraguans. Waving Costa Rican flags, they shouted “Nicaraguans out” and physically threatened some refugees.

It was Costa Rica’s first anti-foreigner rally in modern times and shattered the reputation the nation of five million had for being open and welcoming to those seeking refuge.

Angela Chamorro, who arrived in Costa Rica from Nicaragua in June, was shocked.

“I don’t understand why they hate us,” she said while sitting on a upturned bucket that doubled as a chair in the tiny house that is her new home.

‘Scared for my children’

Ms Chamorro moved to La Carpio, a poor neighbourhood next to a huge landfill outside of San José, with her three children. The family shares the shack’s two tiny rooms with a friend.

Despite its shortcomings, she said the place felt like a refuge after she witnessed a shoot-out at the local market in her hometown of Granada. “Armed strangers started shooting at the salespeople,” she recalled.

“One was hit in the heel, another one in the head and was bleeding profusely. I was so scared that something would happen to my children,” Ms Chamorro, who had already been repeatedly mugged at gunpoint, said of her reasons for leaving Nicaragua.

“Some of the Nicaraguans here may be violent,” she said referring to a number of recent murders allegedly committed by Nicaraguans. “But the vast majority of us are just looking for a safe haven.”

One of the Costa Ricans angered by the influx of Nicaraguans is Miria Gómez.

Draped in the Costa Rican flag, the 60-year-old is yelling into a microphone at an anti-foreigner march in Parque de la Merced. “We are defending our fatherland,” she shouts to applause from two dozen onlookers.

She argues that Nicaraguans only come to Costa Rica “to commit crimes” and resents what she claims is the preferential treatment they receive.

“Nicaraguan refugees receive free water and electricity. But Costa Ricans are also suffering and don’t receive the same support,” she says, referring to Costa Rica’s recent economic slump, which has seen unemployment figures rise to their highest level in a decade.

The government denies refugees receive state subsidies apart from being offered shelter when they have nowhere to live.

University of Costa Rica immigration researcher Carlos Sandoval has no doubt that the mood in Costa Rica has shifted.

“The xenophobic march was a turning point. Our whole image as a liberal nation changed,” he says of the first anti-immigrant demonstration in August.

Mr Sandoval wants a sense of solidarity and hospitality to prevail in Costa Rica and has helped organise counter-demonstrations welcoming Nicaraguans.

Nicaraguans still meet at Parque de la Merced, even when that means having to listen to Miria Gómez’s angry rants. But Ms Chamorro prefers to stay in La Carpio nowadays. She feels the park is no longer safe for her children.

Despite the backlash against Nicaraguans, she, like student Henry Obregón, will stay in Costa Rica for now. Eventually, they would both like to return to their home country but they say that first it would have to be safe for them to return.