After much anticipation, Prince Harry and Meghan Markle welcomed their first child, a baby boy, on May 6, and royal fans around the world are beaming with delight. On May 8, the new parents revealed their newborn son’s name and introduced Archie Harrison Mountbatten-Windsor to the world.

“We are pleased to announce that Their Royal Highnesses The Duke and Duchess of Sussex welcomed their firstborn child in the early morning on May 6th, 2019. Their Royal Highnesses’ son weighs 7lbs. 3oz,” The Sussex Royal official Instagram page said in a statement on Monday. “The Duchess and baby are both healthy and well, and the couple thank members of the public for their shared excitement and support during this very special time in their lives.”

The Duchess of Sussex called her new baby “magical” and “pretty amazing.”

“I mean I have the two best guys in the world, so I’m really happy,” she told the press on May 8.

Harry shared, “We’re just so thrilled to have our own little bundle of joy and be able to spend some precious times with him as he slowly, slowly starts to grow up.”

Prince Harry didn’t reveal their son’s name immediately, but said he’ll introduce the baby to the world in due time. We do know, however, that he shares the same birthday with some big names such as George Clooney, Tony Blair, Sigmund Freud and Meek Mill.

Archie Harrison was born about two weeks before his parents’ one-year wedding anniversary. Designs and merchandise creations were already in the works as people eagerly awaited his birth and counted down the days after the October pregnancy announcement.

Etsy, home of handcrafted art and jewelry, sells its fair share of royal baby merchandise. For instance, royal fans, mothers-to-be or moms in general can purchase a necklace that says “Mommy” written in cursive. It is supposedly inspired by the former Suits star herself. Mother’s Day is, after all, just around the corner.

For those less inclined to wear jewelry, mugs and other home goods are available to buy. One Etsy designer makes ceramic mugs that say “Prince Harry and Duchess Meghan Royal Baby Watch” and include a drawing of a baby sitting in front of a palace. They’re also available on Amazon along with some other prints so you can sip your morning coffee (or “cuppa”) in royal style.

The Royal Collection, which is the official gift shop for the royals, released a Limited Edition Teddy Bear and there are only 100 in stock. It features a hand-embroidered crown on one of the feet and has “2019” sewn under it. The gift costs £125, which equates to just about $161. The little bear even comes with its own box.

The bear is made out of alpaca fleece with cotton and pure silk. The Royal Collection describes the memorabilia as “a teddy bear to enjoy and treasure for future generations.”

According to the New York Times, even baby rash cream is getting its own royal spin on it. Tilletts Jewellers of Norwich are selling a $5,500 lid made for Sudocrem. The jewelry company describes the memorabilia, which is called “The Meghan Sparkle,” as a “diamond pave-set 925 sterling silver lid, hand-engraved with the flags of the United Kingdom and the United States of America.”

The Meghan Sparkle was designed to emulate the duchess’ “natural charisma and sparkle of Meghan herself.” Although there is a hefty price tag for the baby rash cream lid, Tilletts wrote that all proceeds will benefit the charity Ickle Pickles, which “provides intensive care equipment for premature babies.”

It’s not just pill boxes and teddy bears, either. The company My 1st Years makes personalized toys and clothing items, including plush robes, towels, rocking chairs, shoes and more. They even launched a special Royal Collection in honor of Baby Sussex, so anyone’s kid can be dressed and treated like a royal.

Remember the time Prince George met then-President Barack Obama and made collective hearts burst around the world as he greeted the president in his pajamas? Well, that was his own My 1st Years robe.

In anticipation of Baby Sussex, My 1st Years sent the Duchess of Sussex a customized pair of Wellies (short for Wellington boots).

Other royal fans can wear their affection on their sleeves and phone cases too. The customized item website Red Bubble has Meghan and Harry iPhone cases with their photo on it. There are others that commemorate the royal baby with two intertwined hearts, one with the Union Jack and the other with the American flag. People can show off their love in the form of dresses as well as skirts. 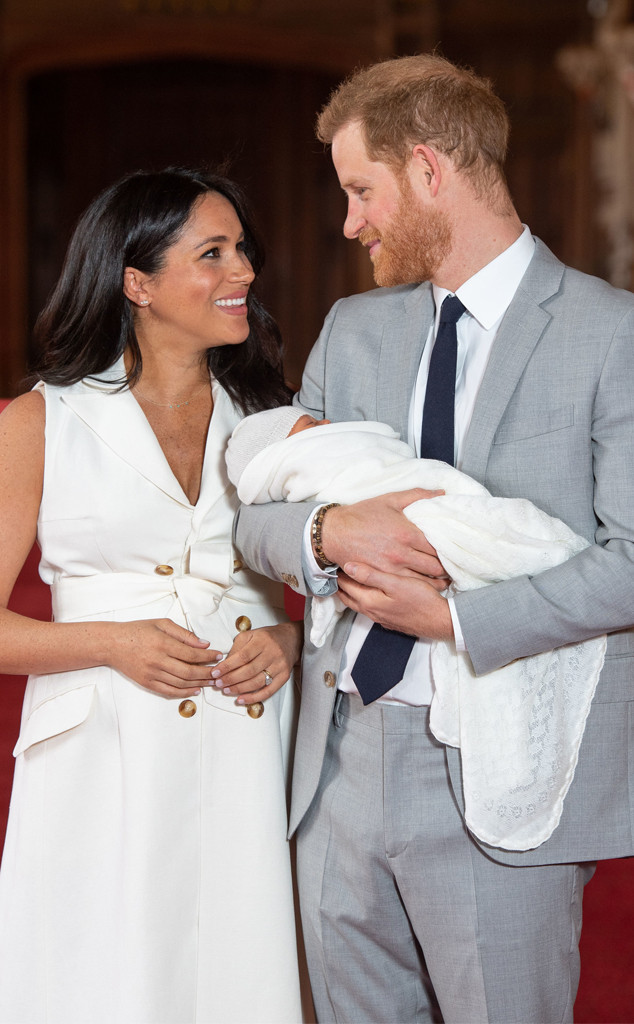 However, unlike other royal family members, Prince Harry and Meghan will reportedly not be releasing their own special line of memorabilia for their baby.

A spokesman for the Royal Collection Trust recently told The Independent, “We have no new ranges to announce.”

The Royal Collection, the official royal gift shop, sold pillboxes, plates and other decorations to commemorate Kate Middleton andPrince William‘s third baby Prince Louis who was born on April 23, 2018. There were similar gifts and souvenirs for their other children, Prince George and Princess Charlotte.

Fear not, Meghan and Harry fans! The Royal Collection still sells some plates and other souvenirs commemorating the royal wedding.

Official and unofficial merchandise aside, it turns out that being a royal baby is a pretty lucrative business.

Money reported at the time of Prince Louis’ birth that the baby—who was merely hours old at this point—was expected to rake in $70 million to $125 million in memorabilia sales as well as other goods. Not bad for a newborn!

The company Brand Finance explained to the publication that in 2018, Prince George was worth $3.6 to the British economy whereas Princess Charlotte was worth $5 billion. The huge discrepancy derives from what’s known as the “Charlotte effect.”

David Haigh, CEO of Brand Finance, explained to Money, “A princess attracts endorsements from fashion brands and people get excited about her clothing and accessories choices.” Prince Louis is reportedly going to be the least lucrative of William and Kate’s three kids, but take that figure with a grain of salt. Money reports Prince Louis was expected to add $125 million to the economy. Once again, not too shabby.

Fashion played a big role in their worth as well as souvenirs. They all made impacts on sales from the moment the public first caught a glimpse of the royal newborns. Prince George’s swaddle baby blanket that he was presented in outside of the Lindo Wing sold out immediately. The same thing occurred with Charlotte. It’s safe to assume that the trend will continue with Baby Sussex as well as Meghan’s debut dress.

Alex Haigh, the director of Brand Finance, told Women’s Wear Daily in April, “For the baby fashion market, this means a considerable uptick in interest for those brands worn by the new royal bundle of joy.”

Haigh added, “We are most certainly expecting a frenzy in this market, both for in-store purchases and online orders, especially as the love affair between the royals and the fashion industry shows no sign of slowing down.”

Haigh told the publication that Baby Sussex’s effect “will cause a similar fashion frenzy that we have seen with all three of the Duke and Duchess of Cambridge’s children.”

There are some estimates now that Meghan and Harry’s royal baby boy will bring in over £1 billion of spending over a two-year span.

Other major royal celebrations play a huge role in boosting the economy as well.

People reported in 2016 that the princess’ birth and Queen Elizabeth II’s 90th birthday helped boost the economy a ton. A report by the Royal Collection Enterprises said “retail sales bounced back” thanks to those two major milestones. All of Princess Charlotte’s official China sold out immediately.

Forbes reported in 2017 that the entire British Royal Family was worth about $88 billion and much of that is due to their brand as a whole.

Needless to say, the royals are huge assets to the British economy, and Archie Harrison will certainly be no different.

Congratulations, Harry and Meghan and welcome to the family, Archie!