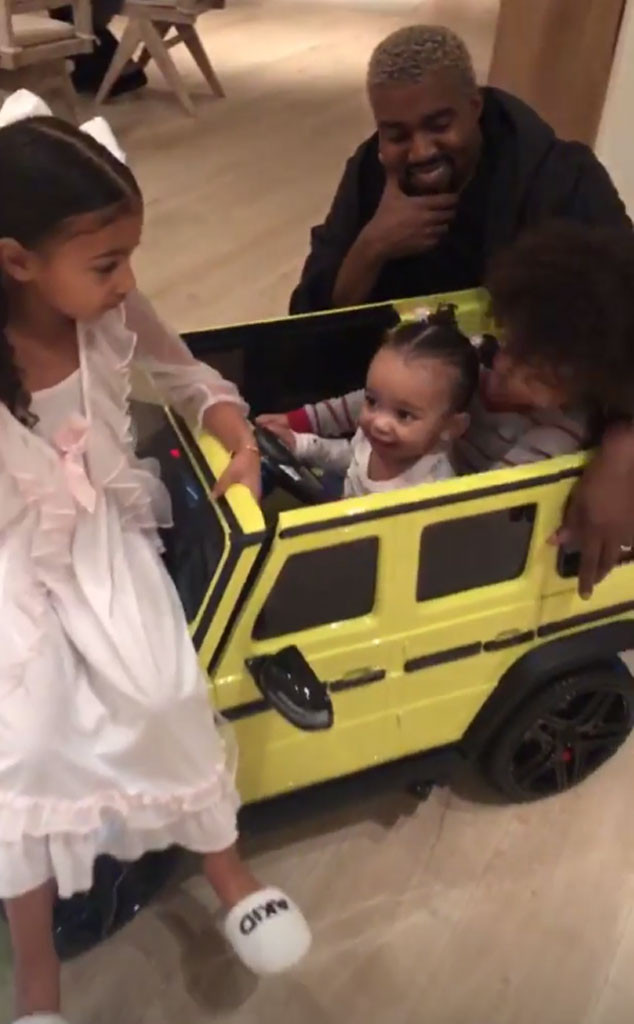 Chicago West is looking more and more like her mother Kim Kardashian with each passing day. Her birthday present is no exception.

The youngest Kardashian-West kid turned 1 on Tuesday, and some family members gathered at Kim and Kanye West‘s home for a low-key dinner. While the dinner might have been relaxing at home, Chicago’s presents took center stage. Kim documented some aspects of their family night together, which involved a special gift from auntie Kourtney Kardashian. Kim’s big sister got Chicago a neon yellow Mercedes G-Wagon (not the real one of course! She would be about 15 years too early for that), so now she can ride around her Hidden Hills, Calif. home in style.

But why a highlighter yellow Mercedes? In August, Kim and Kanye went down to Miami (where they now own a very nice $14 million condo) for their pal 2 Chainz and Kesha Ward‘s wedding. That entire weekend, Kim rocked neon colors around the city, including a bright green dress that also happened to match their Mercedes G550 they rode around in. Also present that weekend: a neon green wig and Lamborghini.

Upon returning from Miami, the “Stronger” rapper surprised his wife with none other than a neon green Mercedes G550 4×4 SUV.

She called the car her “baby” in an Instagram video that showcased her new ride. “Look who surprised me with this baby, you guys,” she said while walking towards the car as her son Saint West ran by. “I got the truck of my dreams ’cause I was so excited in Miami. I’m so excited.”

Well, now Kim’s “baby” has a baby! The KKW Beauty owner showed off the toy car in her Instagram Story.

“It’s Chicago’s birthday and look what Kourt pulled up with,” Kim said in one video. “This is what Chi gets to match mommy. Oh my gosh, thank you Kourt!”

In another video, Chicago played with the steering wheel while Saint sat right behind her. Kim and Kanye’s daughter North West sat on the front of the car. “We’re driving!” Saint exclaimed at one point. Chicago flashed a huge smile and looked happy as can be while at the helm.

The bright green/yellow Mercedes strayed from the usual car of choice for the Kardashian kids (hello sparkly pink and blue Bentleys), but then again, Chicago is only 1 and about to become a big sister.