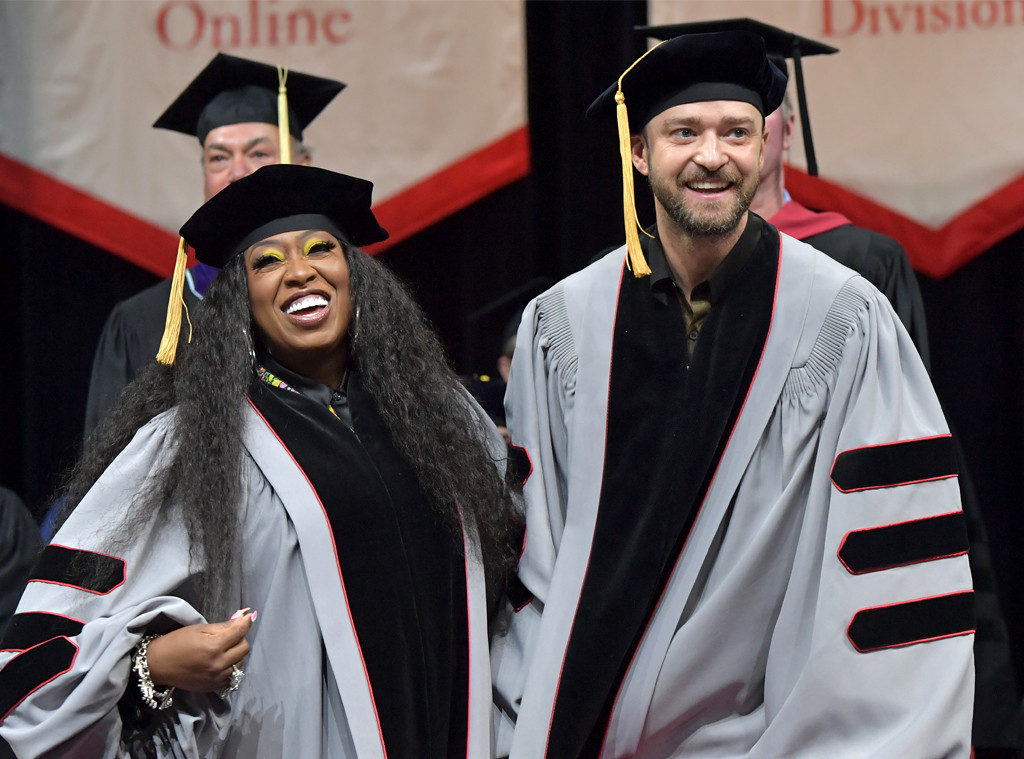 That’s Doctor Timberlake and Elliott to you.

Justin Timberlake Missy Elliott and Grammy-winning composer Alex Lacamoire received honorary doctorates on Saturday from the prestigious Berklee College of Music in Boston and they all had powerful words and lessons to share with the graduating class.

All three artists shared their achievements on social media and encouraged everyone not to give up on their dreams, no matter the setbacks that come your way.

CBS Boston reports that the “Work It” rapper told graduates, “There will be ups and downs — prepare for that. As long as you are breathing, it is never too late. Don’t forget that. You have come too far to quit.”

Berklee called Elliott a “groundbreaking solo superstar, pioneering producer, songwriter, singer, and rapper” in their announcement about the artists receiving the honorary diploma this year.

Her enlightened words at the podium mirrored an Instagram video she shared on Thursday. She recorded a video of herself writing a note on a yellow legal pad that said, “For those of you going through rough times and feel like giving up: Do not give up! Keep the faith. You got this!”

The sage wisdom continued into her caption.

“Sometimes you may feel like giving up because you work so damn hard and you still not in the place you want to be if its Mentally/Financially/Job/ or whatever but even if it feel like its a long time DO NOT LOSE THE FAITH!” she penned. “Speak it into EXISTENCE! Most of the time it don’t happen over night but if you keep BELIEVING & SPEAKING it something good will most likely come out it ‼️”

According to CBS Boston, Elliott is the first hip-hop artist to receive an honorary doctorate from the music school. Similarly, she will become the first female inducted into the Songwriters Hall of Fame in June.

Meanwhile, the “Cry Me a River” singer spoke about success, failure and everything in between.

“You’re defined by what you define failure as. It’s not a thing if it leads you to your success,” he encouraged the graduates. “It’s all part of the journey.”

The 38-year-old also told the crowd that he hopes to “look around and see this graduating class” in the music scene.

“Meet me at the studio. I want to see y’all!” he declared.

Timberlake posted a photo of himself on Instagram with his face shielded by the diploma.

“No Dream is too big!!! Keep chasing!!! Trust me… I’m a DOCTOR!!  But, for real… THANK YOU to @berkleecollege for this incredible honor—I’m very humbled and grateful,” he wrote.

His wife Jessica Biel commented, “literally every hat looks good on you, but this is my favorite one.”

Dwayne “The Rock” Johnson also replied, “Congrats my friend. So technically, you can now examine a new ‘rash’ I’ve developed.”

According to CNN, other musicians who have received honorary doctorates from Berklee include Aretha Franklin, Quincy Jones, B.B. King, Smokey Robinson, Rita Moreno and Duke Ellington.

So does this mean an *NSYNC reunion tour falls under doctor’s orders?