There is great debate over “sanctuary cities.’ The term is actually a bit of a misnomer which makes quantifying the amount of sanctuary jurisdictions difficult.
Wochit

The panel approved the proposal by Sen. Joe Gruters, R-Sarasota, on a party line vote after Gruters agreed to soften its language. The measure stalled in a previous meeting of the Senate Judiciary Committee after scores of immigrants and their allies protested the bill would require every single person arrested to prove they are a U.S. citizen.

Last session, the Judiciary Committee killed a bill similar to this year’s SB 168, which then-Rep. Gruters had chaperoned through the House and forwarded to the Senate. 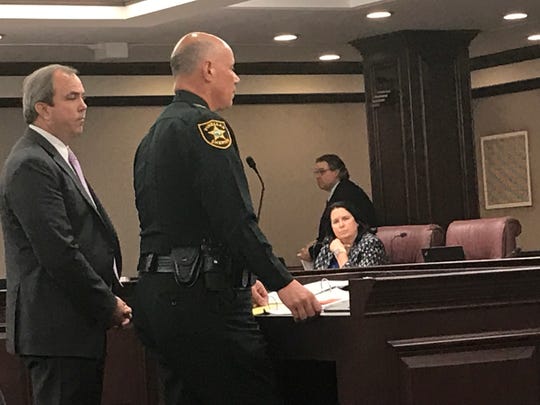 Gruters is in the Senate now. He’s also the chair of the state GOP and has made the bill a top priority this year.

After opposition made the Judiciary Committee blink last week, Gruters reworked the measure to narrow its focus to two things.

“It gets criminals off the streets and prevents local governments from enacting laws that prevents cooperation with federal law officials,” Gruters told the panel.

The bill establishes procedures for local law enforcement agencies to honor all requests made by U.S. Immigration and Customs Enforcement. It would also prohibit any law or procedure which impedes cooperation on immigration enforcement matters.

Gruters agreed to strike a provision that could have led to the removal from office of an elected official who failed to report a violation of the law’s requirements. The provision was amended to a contempt of court charge.

He also dropped a measure that could have have led to an indefinite detention of immigrants. Now, if ICE issues an immigration detainer the individual can be held for 48 hours.

Gruters consulted with Pinellas County Sheriff Bob Gualtieri, who stood by his side at the lectern and ensured lawmakers the measure did not violate constitutional or civil rights.

“We want to make sure everything is legal,” said Gruters, “that we make sure it has practical application and that it will work in the real world.”

The four Republicans on the committee voted as a bloc to kill a series of amendments by Sen. Jose Javier, D-Miami-Dade. Javier sought to exempt police at schools from the measure, require a judicial warrant instead of an immigration detainer to hold an individual and to place restrictions on the use of information compiled in a detainer request. All died on party line votes.

Opponents warned the measure would lead to a violation of an individual’s due process rights.

“We share your frustration with a broken immigration system, but we need a comprehensive immigration reform at the federal level not patchwork piecemeal system at the state level,” said Ingrid Delgado of the Florida Conference of Catholic Bishops. “So, let’s encourage Congress to pass immigration reform.”

Gruters has dubbed the proposal “the Rule of Law Adherence Act.” It expands upon an agreement that now exists between 29 Florida sheriff’s departments and Immigration and Customs Enforcement.

The measure has two more committee stops before heading to the Senate floor. A similar bill in the House has yet to be scheduled for a hearing.