You thought awards season was over? Think again!

Just days after the 2019 Billboard Latin Music Awards, top artists once again gather together in Las Vegas at the MGM Grand Arena for the 2019 Billboard Music Awards. The show this year features all-star performances by a slew of talented musicians, including the Jonas Brothers, Madonna, Ariana Grande, Ciara, BTS with Halsey and more.

Plus, Taylor Swift performed her new song “ME!” with Panic! at the Disco’s Brendon Urie. The awards show marks the first time Swift sang the record-breaking “ME!” in front of a live audience, and it was definitely an energetic and colorful way to kick off the show.

Kelly Clarkson took the stage as the host of the show for the second year in a row. She told E! News’ Jason Kennedy on the red carpet that she’s “not really a planner” but she rehearses “enough” for the big night. The singer also teased on the carpet that she will get to achieve her “childhood dream” because she will go onstage right after Mariah Carey

Clarkson told E! News in February upon the announcement, “We’re turning it up a notch this year and I can’t wait to celebrate all of my fellow amazing artists for another unforgettable night of live music.”

Unfortunately, two artists we won’t see tonight are Sam Smith and Normani. Smith recently canceled some of his upcoming tour dates as ordered by his doctors.

Normani was supposed to perform alongside the “Stay With Me” singer and she said the news “truly disappoints” her and that she is “heartbroken.”

With this many talented musicians packed into one room and one red carpet, there’s sure to be plenty of jaw-dropping moments that don’t make it to the small screen. E! News has got you covered so you know what’s happening when the cameras are rolling and when they aren’t. Former Glee star Kevin McHale arrived at the show with his boyfriend Austin McKenzie and they found a quiet spot inside and had a sweet PDA moment. McKenzie wrapped his arm around his boyfriend and they shared a quick kiss.

Also inside, newly retired New England Patriots tight end Rob Gronkowski was apparently M.I.A. for a bit because a production member asked around, “Can anybody locate Rob Gronkowski right now?”

The NFL player played a hilarious role in the opening part of the show when he dressed up in a security guard outfit and asked her to leave, making fun of the situation when she was mistaken for a seat filler.

Sophie Turner got to her seat a few minutes before the show and waved at (real) seat fillers inside the arena. She then found a black bag with a Billboard logo on it, pulled a bag of popcorn out of it and started snacking on some of it. A production member brought her a glass of wine not long after that. The Game of Thrones star even took some photos with her fans.

Zedd and one of his friends got escorted to the seats and the DJ was apparently completely oblivious to the fact that many girls in the crowd were fawning over him.

Cardi B and Offset walked to their seats holding hands, which was tame compared to their R-rated PDA that they shared on the red carpet earlier. The “Bodak Yellow” rapper, who is nominated for 21 awards, was followed by a huge entourage who helped fix her hair and makeup. She and Offset were sitting front and center next to Khalid.

There was lots of commotion when the show was about to start, which could do with the fact that the Jonas Brothers walked into the arena. BTS followed behind and the crowd basically broke the sound barrier with their screams. It turns out the fans weren’t the only members of the BTS ARMY in the crowd. There were a number of celebrities and artists who absolutely freaked out upon meeting the K-pop band, including Terry Crews, Julianne Hough and Ciara and her son Future Zahir Wilburn.

The show commenced with Taylor Swift’s performance but when the cameras cut away from her, she let out a huge sigh and then gave Urie a huge high-five. We love teamwork!

The “Shake It Off” singer took some pictures with Hough, who was making the rounds and chatting it up with some of her friends.

Priyanka Chopra, Sophie Turner and Danielle Jonas all danced their hearts out during the Jonas Brothers performance, and then Priyanka and Sophie took a picture with Clarkson. The J Sisters were loving it.

Ariana Grande performed her hit song “7 Rings” and nobody loved it more than 4-year-old Future who stood on his chair during the entire thing.

During one commercial break, Taylor and Halsey reunited in the aisle and looked really happy to see each other. They also shared a hug after Madonna’s set.

Maluma bowed down to Madonna after their performance of “Medellin” that involved a lot of holograms. At about the halfway mark in the show, producers passed around cake pops to hungry guests.

Many Swifites had their nights made at the show because the 29-year-old singer took tons of photos with her fans at basically every commercial break. One fan even started crying when she met T-Swift.

She also got up and had a very animated conversation with Ciara and some of her friends. They all posed for a photo together. Taylor made little Future’s night, too, and spent some time talking to the 4-year-old.

Gronk apparently jumped over a few chairs in order to get back to his seat on time to be back with his girlfriend. He’s not a Super Bowl winner for nothing!

Khalid ran over to H.E.R. during a break and gave her a huge hug. 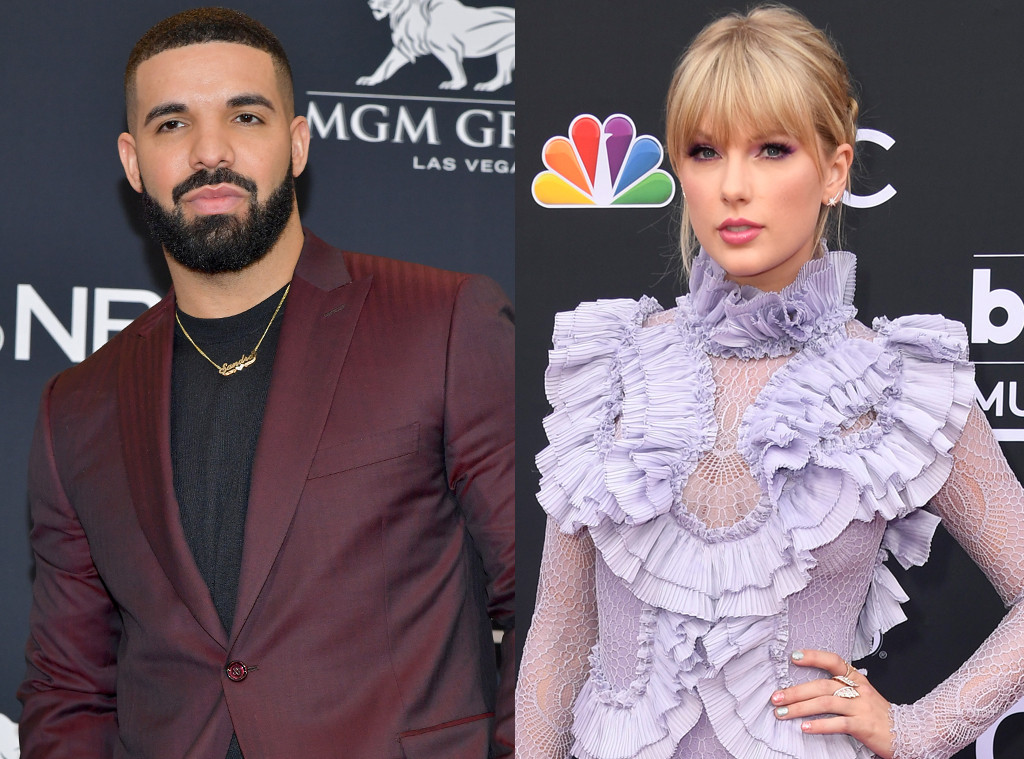 BTS and Halsey’s debut performance shook the MGM Grand Garden Arena and fans could barely handle it. The musicians held the end pose for about 30 seconds after the set ended and then they all shared a hug.

We’ve got to give a special shout out to Drake, who just dethroned Taylor Swift for the most Billboard Music Awards ever at 27.

Make sure to check out the full list of Billboard Music Awards winners here.

Watch E! News Thursday, May 2 at 7 p.m. for a recap of The 2019 Billboard Music Awards’ biggest moments!