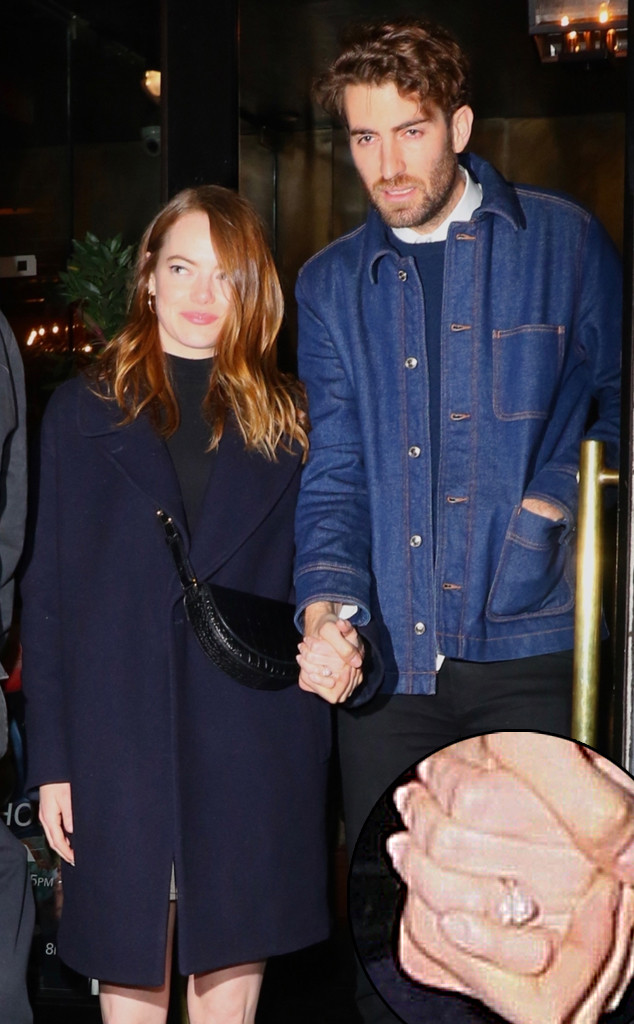 Emma Stone looks head over heels during her first public appearance after announcing her engagement.

The 31-year-old actress stepped out with her soon-to-be husband, Dave McCary, last night for the Saturday Night Live after-party in New York on Dec. 7.

The happy couple was pictured holding hands and smiling as they head out for a night out on the town.

On Wednesday, Dec. 4, the Oscar-winning actress and her longtime boyfriend revealed the happy news on Instagram by sharing a photo of the beautiful ring. The SNL comedian simply captioned the announcement with a heart emoji.

Stone stepped out for the SNL after-party donning a navy coat paired with a black turtleneck and McCary sported a denim jacket with a navy jumper underneath.

But Stone’s engagement ring was the best accessory.

Following their engagement, E! News learned that the La La Land star’s sparkler is the Winter Pearl Ring by Catbird. The flawless piece is made of solid 18-karat gold and features 0.37-carat diamonds. It also has a gorgeous 8mm untreated Akoya pearl right in the center. The band is a 1mm band with an 11mm center. The stunner was designed by Kataoka and was made in Japan, retailing for $4,780.

The 34-year-old SNL writer and segment director have been dating since 2017. Back in November 2017, the two were spotted out together in New York.

Fast forward to this past January, the two lovebirds enjoyed a date night together while making a rare joint appearance at the 2019 SAG Awards, where Stone was nominated in two categories.

Since romance rumors sparkled, two have kept their relationship private. Last summer, however, Stone opened up to Elle about her changing interest in marriage and motherhood.

In Mexico, some Haitians find a helping hand