Dua Lipa and boyfriend Anwar Hadid are giving us all the feels with their public display of affection at the MTV EMAs 2019.

The “New Rules” singer not only attended the 26th annual EMAs in Seville, Spain to celebrate a star-studded night full of amazing musical acts, but she also took to the stage to perform in a sultry black leotard.

Of course, her boyfriend Anwar was also there to support her on this special night. While the two sat back and enjoyed the show, Anwar proved to be head over heels as he gave his girl a big kiss on the cheek.

The two initially sparked romance rumors earlier this summer, over the fourth of July weekend, after they were spotted getting real cozy with each other at the British Summer Time Hyde Park music festival in London, England.

While the two weren’t pictured walking the red carpet together, Dua Lipa walked alone, looking goth chic in an all-black outfit. Her blond hair was slicked back in a low bun and rocking some subtle gold eyeshadow along with a rich mauve shade on the lips.

On the red carpet, the singer also stopped by to happily snap pictures with her fans.

After her performance and after a quick outfit change, Dua Lipa was pictured in the winner’s room donning an oversized royal blue tuxedo-style dress. She paired it with matching sheer royal blue tights and satin ankle booties. 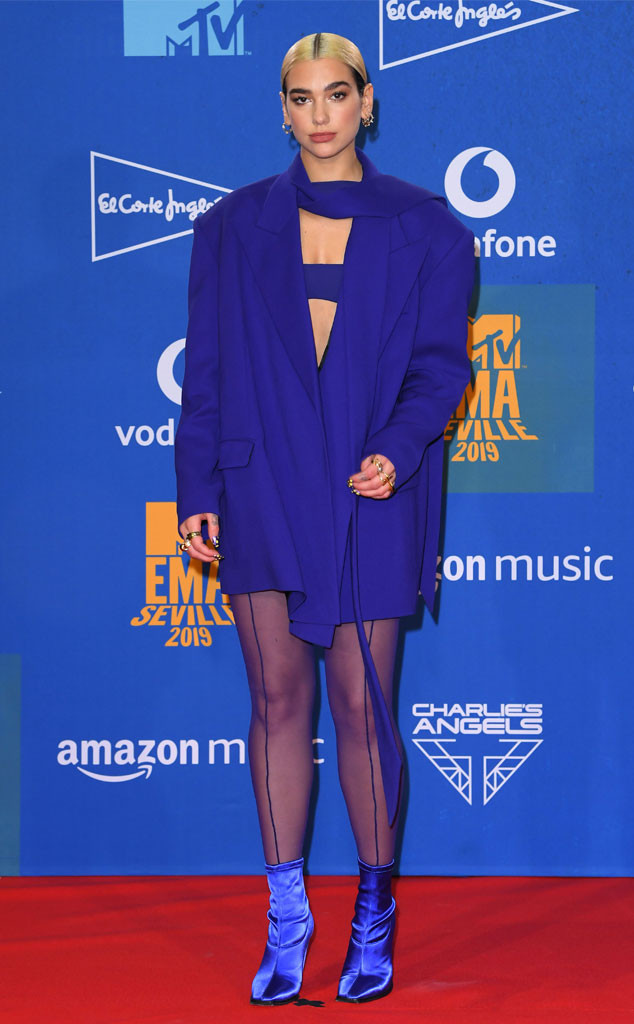 Romance rumors of the pop songstress and the 20-year-old model came nearly a month after the 23-year-old “One Kiss” singer split from her longtime boyfriend Isaac Carew. The two had called it quits in early June and were last seen together at the 2019 Met Gala. Previously, Anwar was also in a relationship but split from actress Nicola Peltz in the summer of 2018.

In August, things continued to heat up between the young couple after they were seen together again in Los Angeles.

“They looked good together,” a source told E! News at the time. “They walked close together and she had her arm in his. They took their time talking to friends before leaving and saying goodbye.”

We’re glad to see the two are still going strong!