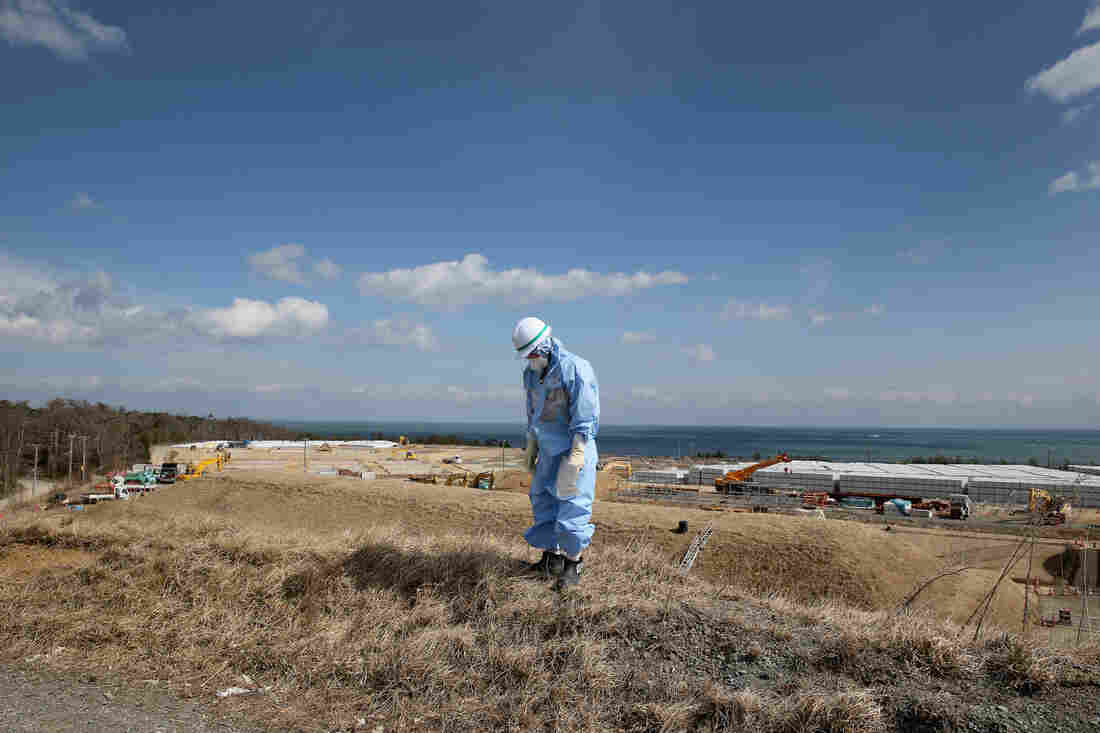 An employee of Tokyo Electric Power Co. works at Japan’s Fukushima Dai-ichi nuclear power plant to decontaminate the area after the 2011 nuclear meltdown. A Vietnamese laborer in Japan on a training program says he was also put to work cleaning up the site, but with inadequate gear. 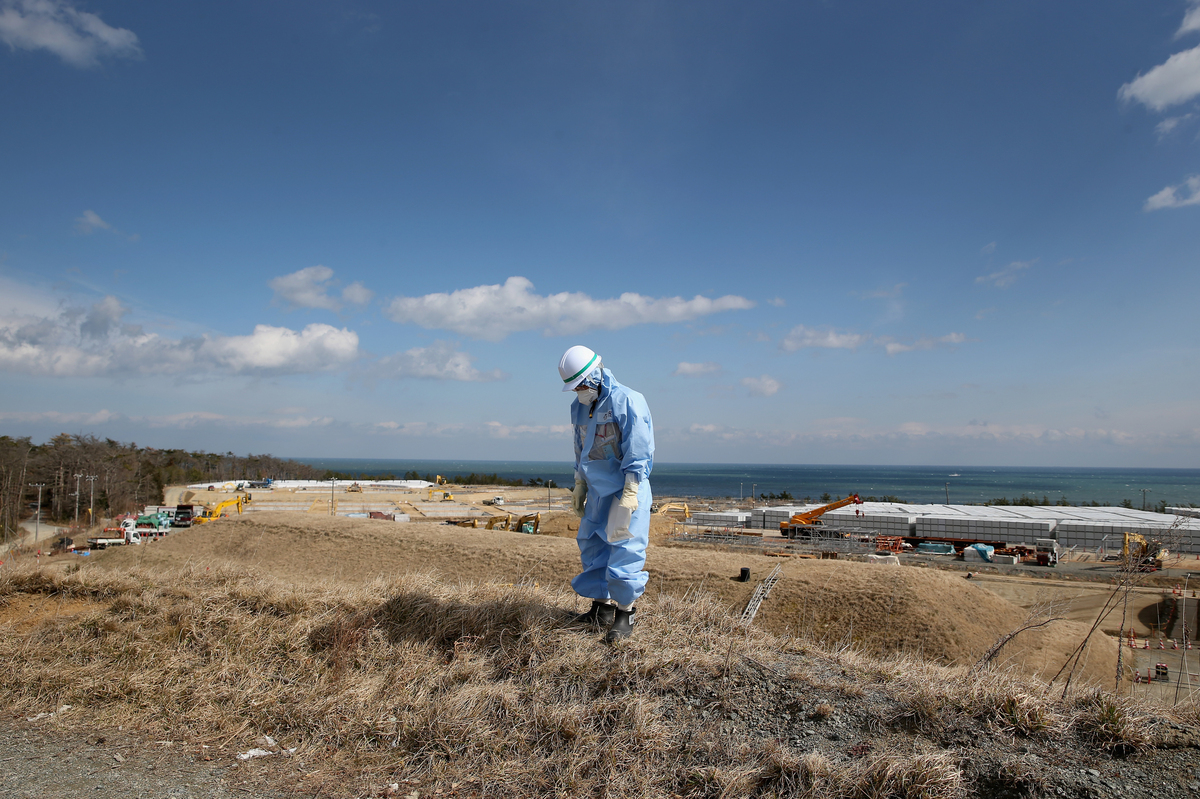 An employee of Tokyo Electric Power Co. works at Japan’s Fukushima Dai-ichi nuclear power plant to decontaminate the area after the 2011 nuclear meltdown. A Vietnamese laborer in Japan on a training program says he was also put to work cleaning up the site, but with inadequate gear.

The wind howls and snow drifts around a house in Koriyama, in northeastern Japan’s Fukushima prefecture. The town is inland from Fukushima’s coastal areas that were devastated by the 2011 earthquake, tsunami and nuclear plant meltdown.

Inside the home, several Vietnamese laborers prepare dinner. The house is a shelter, run by local Catholics, for foreign workers who are experiencing problems in Japan.

One of the workers is surnamed Nguyen. He came to Japan in 2015 as part of a government program for technical trainees. He asked to use only his last name, as he doesn’t want his family in Vietnam to know what he’s been through.

He says he paid the equivalent of about $9,200 to a Vietnamese broker and signed a contract with a private construction company in Koriyama, Japan, to get on-the-job training as a rebar worker.

“I expected to come to a country more developed, clean and civilized than my own,” he recalls. “In my mind, Japan had many good things, and I wanted to learn professional skills to take home.”

Instead, he says he was ordered to do jobs such as removing radiation-contaminated soil from land around the Fukushima nuclear power plant.

“We were deceived,” Nguyen says, referring both to himself, and technical trainees in general.

He would not identify the company by name so as to avoid undermining negotiations he and a workers union are holding with the firm to get compensation.

He says the company issued him gloves and a mask, but not the kind of gear that would protect him against radiation. He did receive a radiation detector to wear, but only before safety inspectors paid a visit. He complained to the company, which ignored him.

Complicating matters, he had borrowed money from a bank and family members in Vietnam to pay the broker who helped him get to Japan.

“I wanted to sue my company, but I didn’t know how,” Nguyen explains. “I didn’t speak Japanese, or understand Japan’s legal system. So all I could do was be patient, and keep working to pay off the debt.”

Technical trainees like Nguyen now account for about 20 percent of the 1.3 million foreign laborers in Japan, according to government data cited by local media.

The Japanese government intends to bring in 345,000 more foreign workers in the next five years, to staff sectors including restaurants, construction, agriculture and nursing. Many will come from nations such as China, Myanmar, Vietnam and the Philippines.

Japan has both the world’s third-largest economy, and fastest-aging population. It also faces an acute labor shortage. Now, it is doing something previously unthinkable: allowing immigration — even as its prime minister denies it.

But advocates for the foreign workers warn that without an overhaul of the technical training program, many of the newcomers could be subjected to the same sort of exploitation Nguyen says he has experienced. Critics equate the training program with “slavery,” and deride it as the creation of labor without a labor force.

Most trainees are paid below minimum wage. They die of work-related causes at twice Japan’s overall rate, according to an analysis of government data by The Japan Times.

The problem of labor brokers using debt to enslave would-be immigrants is an element in human trafficking in many countries around the world.

The Japanese government has promised to crack down on unscrupulous brokers, establish 100 “consultation centers” where trainees can report abuses, increase Japanese language training for enrollees and generally strengthen oversight of the program.

But the U.S. State Department’s Trafficking in Persons report for 2018 says that, so far, Japan has failed to prevent brokers from holding technical trainees in “debt bondage,” and sometimes the authorities arrest trainees who escape from “exploitative conditions,” instead of helping and protecting them.

Many conservative opponents of immigration would prefer that foreign workers don’t stay in Japan after finishing the program.

Speaking before the Diet, Japan’s parliament, in October, Prime Minister Shinzo Abe denied that the country is opening its door to immigration.

“We are not considering adopting a so-called immigration policy,” he insisted. “To cope with the labor shortage, we will expand the current system to accept foreign workers in special fields. We will accept foreign human resources that are skilled and work-ready, but only for a limited time.”

Shiro Sasaki, secretary-general of the Zentoitsu Workers Union, which represents some of the foreign workers, rejects Abe’s argument, and adds that Japan’s government is not facing up to the reality of immigration.

“Abe’s definition of an immigrant is someone who lives in Japan long-term, with family,” he says. “But by international standards, the trainees are immigrants. In this sense we can say that Japan is already an immigrant society.”

Sasaki says that opening Japan’s door to immigrants even a tiny crack is better than tricking them into coming.

He says Japan has never experienced mass immigration in modern times, and it has failed to assimilate those few immigrants it has taken in. He sees the whole issue as a test of character for this island nation.

Japan has never been able to examine itself and define itself in terms of diversity.

“Japan has never been able to examine itself and define itself in terms of diversity,” he argues. “Now we must live with diversity, and every single Japanese person must think about it.”

Then again, Robert Dujarric, director of the Institute of Contemporary Asian Studies at Temple University in Tokyo, argues that Abe may have no choice but to reform by stealth.

“Immigration is unfortunately not popular even in countries like the U.S. … which historically have been nations that have been built on immigration. So obviously he’s not going to say: ‘Vote for me, I will bring in 10 million foreigners.'”

Many analysts compare the technical training program to Germany’s gastarbeiter or guest worker program of the 1950s-70s. It too took in laborers from poorer neighboring countries — particularly Turkey — but tried to limit workers’ stay in order to prevent immigration. But the cost of hiring and training temporary workers was too high.

Many workers stayed on, paving the way for Germany to see itself as a de facto immigration nation.

Current trainees like Nguyen may be eligible to remain in the country for up to five years on a new class of visas.

But Nguyen says that without decent pay and a chance to learn new skills, he has no interest in staying on.